The Currin Residence (1959) is a privately-owned, mid-century modern home in Midland, Michigan currently under restoration. The home was designed for Cedric and Betty Currin by architect Francis E. “Red” Warner, AIA.

Warner received his architectural degree from Pennsylvania State College in 1951, after which he began working under the tutelage of Alden B. Dow, FAIA, a former Taliesen fellow and life-long friend of renowned architect Frank Lloyd Wright. Then, in 1957, he started his own architectural firm in Midland. His designs were deeply inspired by nature, and were for those who appreciated beauty without extravagance.

The Currins were one of Warner’s first clients, and their home is a shining example of mid-century modern design, featuring clean geometric lines, an emphasis on function and livability, and extensive use of natural materials such as Douglas fir, redwood, and field stone from Lake Superior. Warner also carefully considered the style and placement of the structures in order to achieve passive solar energy, and an attached greenhouse, also designed by Warner, was added in 1978.

When asked about why he contracted Red Warner to design the home, Mr. Currin replied, “I grew up in Wisconsin and had a general familiarity with Frank Lloyd Wright. I looked up architects in the Yellow Pages and saw Warner’s listing. After visiting his own home, and seeing how easy he was to work with, I decided to go with him. And I’m so glad I did!” 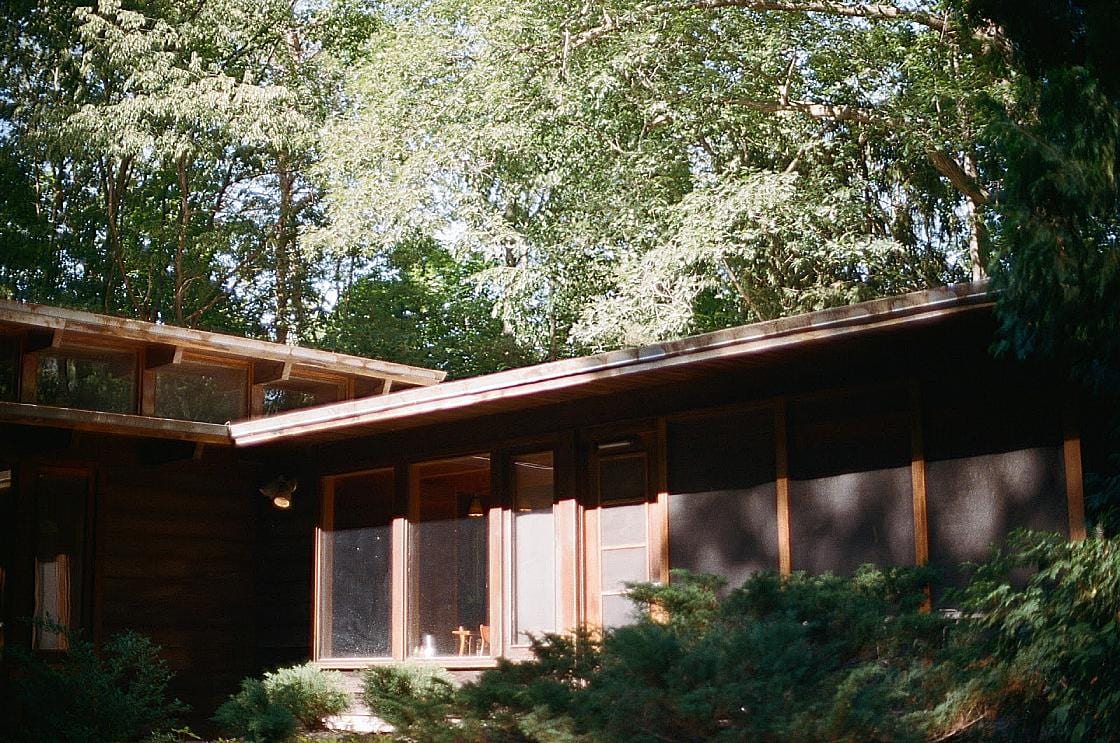 The Currins adored their home and lived there for the rest of their lives. Betty passed away in 2016, and three years later, at the age of 88, so did Cedric. Warner passed away in 2006, and his ashes repose among those of his friends on Midland’s Dahlia Hill.

In 2020, less than a year after Cedric’s passing, a catastrophic flood resulting from two upstream dam failures led to significant water ingress in the basement. The water finally began to recede after it had reached just six inches below the first floor, but not without first causing one of the concrete walls to buckle. Since then, the home has changed hands and a substantial effort to restore the home back to its original condition is underway. Thankfully, the Currin Residence will survive, but many other homes affected by the flood—some also designed by Red Warner and his colleagues—have not been as fortunate.

Nevertheless, the design and architectural details of the Currin Residence have made it a significant part of Midland’s history and a textbook example of Red Warner’s ability to design affordable yet captivating homes.

The following section has been adapted from midcenturymidland.org.

Francis E. “Red” Warner was born in Big Run, Pennsylvania in 1921. He loved the outdoors. Every chance he got he would be out playing, biking, and even jumping off the railroad bridges in the Susquehanna river.

During World War II, he worked as a field engineer in the construction of naval shipyards and power houses. He received his architectural degree from Pennsylvania State College in 1951, where he was also active in many clubs and organizations including Lions Paw Honor Society and Concert Choir. From 1951 through 1957, he considered himself fortunate to be able to work under the tutelage of Alden B. Dow, FAIA, a student and life-long friend of famed architect Frank Lloyd Wright.

Warner often commented that he couldn’t believe he was being paid to work in such an amazing and creative environment.

After studying under Dow for six years, in 1957 Warner started his own architectural firm in Midland. He continued working in the tradition of Alden B. Dow and Frank Lloyd Wright and was known for designing affordable, creative structures. Warner designed over fifty residences in an area extending as far as Barrington, Illinois.

Inspired by the natural beauty of nature, Warner used wood extensively. He especially liked the grain and warmth of Douglas fir beams which he incorporated in many of his designs. He always felt you didn’t have to have a lot of money to live artistically—all you needed was an appreciation for a home filled by light and views of nature. It was in the small details and practicality of his designs that he excelled. Contractors commented that they could tell it was a Red Warner home the moment they saw the front door.

Many of his homeowners were considered extended family because they became so close during the home design process, with Warner stopping in every day to oversee the build and to be sure the contractors were measuring up to his exacting standards. His success can be measured by the extent to which his clients became his best friends and admirers.

His works were honored in a gallery exhibition at the Midland Center for the Arts in 2001 along with those of Alden B. Dow and Warner’s very good friend, Jackson Hallett, AIA.

During his career, Warner served as Director of the Michigan Society of Architects, and President of the The American Institute of Architects-Saginaw Valley Chapter. He was also an active community leader as a member of the Exchange Club, the Boy Scouts, the school district PTA, and as President of the Tri-City All-Breeds Horse Association.

After a long, active and joyful life of painting watercolors, sailing, fishing, tennis, skiing, and caring for his beloved horses, dogs and garden, Warner passed away in 2006 and his ashes now repose amongs those of his dear friends on Dahlia Hill.

The owners of the Currin Residence would like to thank the following individuals and businesses for their support and expertise.